I am a big reader of crime novels. From Agatha Christie to Simon Kernick to the ubiquitous Steig Larsson, they delight me with their rapid plot progression and suspenseful chapter endings, which is something I’ve never been very good at writing myself. Nonetheless, in my daydreams, I have envisioned a series of my own that would combine two of my principal interests: crime novels and historical fiction. It would ideally contain all the charm of the nineteenth-century novel, with the plot development of a modern thriller. Call it Pride & Prejudice & Warrant Cards.

I have occasionally forayed into the world of historical crime fiction, and been disappointed with what I’ve read each time, less because of the lack of CSI-type technology (and have you also noticed that computer hackers of some kind are now essential to move the plot along?) than because they are such unrealistic representations of the eras they claim to inhabit. Admittedly, I am more of a stickler for historical accuracy than most, but it strikes me that there are some major barriers to writing a character in the past that most authors overcome simply by ignoring them. Moreover, being a feminist of sorts, I would insist that the protagonist of my series be female. This choice, of course, compounds the difficulty of the situation – there are a number of alterations that would need to be made to maintain accuracy, all of which would seriously compromise my character’s agency.

Take, for example the question of money. How would she get it? And would she be able to spend it? Most likely she would be an independently wealthy member of the upper-class, in order for her to have the time to chase down suspects and conduct her investigations, given that these were really the only women who had any free time. Though does this just perpetuate the stereotype of the tireless working-class female who would toil for sixteen hours a day, or the middle-class wife who was too busy arranging timepieces on her Adam fireplace and looking after her children to be out in the public sphere much?

But then upper-class lives, as we all know, came with their own sets of rules and limitations. Unless our heroine displayed a systematic disregard for the mores of her age, Lydia Bennet style, it would be impossible for her even to be seen to be working, let alone patrolling the seedier underside of nineteenth-century life. (This brings up an interesting potential plot twist: our heroine would fight crime as a hobby yet could never let anyone save her trusty sidekick know she was the one catching the criminals – an anonymous female crime-fighter! Who would have thought? Not Jane Austen, surely.) No doubt we would have to supply her with a doting husband, one of these uncommonly liberal, long-suffering-but-good-humoured types who would not only tolerate her activities but surreptitiously support them.

Which brings me to my next point. There is no way to get around it – there were many things women just could not do then. Visiting gentleman’s clubs to gather information, moving around unescorted — wearing pants!  Our heroine would certainly need a male counterpart at critical junctures to keep his ear to the ground. With this, I fear I would already be succumbing to the ever-present masculinist telling of history, in which the only ones who can move the plot forward, as it were, are men. It would be a fair charge, and yet I can think of no way to get around it (having ruled out Shakespearean-style cross dressing). Already the wrath of feminists is upon me.

The most important considerations, though, are not the circumstances surrounding our heroine, but how she would think. She would need to have what I call a “contemporary mindset” – a way of looking at the world that is easily recognizable to us, the twenty-first-century readers.  This is why almost all historical fiction – from A Yankee in King Arthur’s Court to the Outlander series – has a link to the present, a protagonist who thinks like we do, and is able to bring his or her superior knowledge from the future and bring it to bear on the past. No doubt this device is used, in part, unconsciously to reassure ourselves that we have, as a human population, actually progressed since the time of the novel. But there is something else: without a protagonist who thinks like we do, with the knowledge we have, it would be much more difficult for us to empathize. We need this contemporary mindset to take us from dry historical facts to characters and situations that are alive with resonance even today.

To me, the great challenge (and joy) of history is getting into people’s heads and thinking the way they thought, experiencing life the way they experienced it, and then bringing that information back to our time to parse the differences. What separates a great historian from a mediocre crime novelist is how accurate his or her understanding is, and how well s/he can translate it for maximum impact.

With all this in mind, I suspect Pride & Prejudice & Warrant Cards* might be a hard sell. We as readers want a protagonist who will break the  norms and wear pants if she wants to. We want a heroine with agency – a term revisionist, feminist, and postcolonialist historians (as well as many others) use to talk about people’s capacity to act and make choices about their worlds. Agency is both a fashionable and a necessary concept, because it highlights the amount of control people had over their surroundings and helps us determine and explain who had power at any given time. Historians in the past most often assumed this was the wealthy men of the ruling class or group (the so-called “Great Man” variety of history). Recently, however, these assumptions have been challenged from a number of directions, and several historians have built their careers around profiling groups of women or other subalterns (according to Wikipedia, “persons who are socially, politically, and geographically outside of the hegemonic power structure”) who by using their limited agency changed the world with small acts of subversion or support.

Such individuals would be unappealing protagonists, though. Stories about characters who largely have things done to them would have little place in the world of crime fiction, as they have little place in our most common representations of history. The heroes of popular history are the kings, queens, explorers, inventors and politicians who broke all the rules, proved everyone wrong, behaved outrageously, or invaded Poland. Similarly, we want our crime fiction heroes to be ex-military men with hearts of gold, or educated, wealthy, and intelligent Miss Marples who have the time and freedom to sift through evidence while knitting. A nineteenth-century woman who is limited in her movements, and who must rely on the tolerance and support of her spouse would surely put any feminist on the alert, no matter how many  times she has re-read Captain Wentworth’s letter to Anne with tears in her eyes. And it would alienate (and probably bore) everyone else, especially those who watch the History Channel or The Tudors religiously and believe that these are accurate representations of how things were.

Alas. It seems my great novel series will just have to be about something else.

*Note: this is just a working title. Others I considered included From Brighton With Love, And Then There Were No Ribbons, and The Case of the Purloined Damask Curtain. 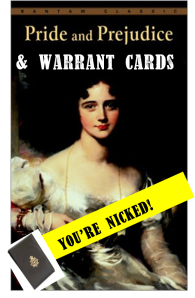 This entry was posted on Thursday, September 30th, 2010 at 11:19 pm and is filed under Uncategorized. You can follow any responses to this entry through the RSS 2.0 feed. You can leave a response, or trackback from your own site.

2 Responses to Historical Crime Fiction, Agency, and the Contemporary Mindset